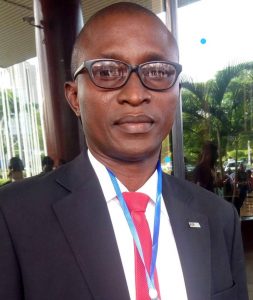 Mr Olajide Olagoke an Internal Auditor who ensures that the financial dealings and proper books of account are in place, recorded and kept as at when necessary in accordance with the rules and regulations. As an auditor he is also saddled with the responsibility of carrying out staff audit exercise, pre and post audit of all payment vouchers, value for money audit, investigation, store and stock audit, report writing and playing an advisory role to the management where necessary etc.

He joined the Teaching service commission In 1990 as Account Assistant II, he was deployed to Min. of Agriculture in 1999 where his service was regularised to the main stream of the civil service. As diligent officer of internal Audit, between 1999 and 2005 he Worked at Ministry of Agriculture, Min. Of Finance and Cabinet office, is integrity and team work ability was also displayed at his subsequent duty post such as Ministry of Transportation and Onikan Health Centre in 2005 and 2015 respectively.

He was later deployed to Motor Vehicle Administration Agency where he served till February 2020 before his deployment to Lagos State Parks and Gardens Agency in March 2021.

He attended Obele Community High school 1978 – 1984, Obele Community High school 1984 – 1989 and in his quest for knowledge, he proceeded to Lagos State University where he obtained Bsc in Business Administration 2012. Going forward in his aspiration to be a professional he applied to the Association of National Accountant of Nigeria (ANAN) and became chartered in 2017 as (CNA).

He is married with children and loves travelling, playing Table Tennis and football.